The Men of 9 Platoon, 27 (Machine Gun) Battalion Italian Strongpoint near Ed Duda The Blockhouse - Then and Now The Mosque - Then and Now Camelthorn and Land Mines Peter Cox at a Sangar at Sidi Rezegh Airfield 3 Company after Sidi Rezegh

Desert War – The Battle of Sidi Rezegh is the result of two visits made by Peter Cox and his wife Robin to the battlefield near Tobruk in Libya. Peter’s first book, Good Luck To All The Lads – The Wartime Story of Brian Cox 1939—43, records the war history of Brian and his platoon, who fought in the Sidi Rezegh battle, part of Operation Crusader. After receiving positive feedback on the book and meeting further veterans of the battle and their families, Peter and Robin undertook a second visit to the battlefield, following which Peter was motivated to write Desert War — The Battle of Sidi Rezegh, a more complete account of the battle. 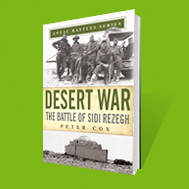 ‘A clear account was certainly needed and this well written and balanced study meets that overdue requirement.’ — Britain At War, June 2015

‘… a lucid, well-researched study of the conflict and those who fought in it … [Cox] succeeds in transforming a single place name into a vivid part of New Zealand history.’ — NZ Listener, 13 June 2015 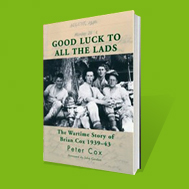 Good Luck to All the Lads

'Few war books trace the changes in men's psyches from idyllic upbringing in New Zealand to worn and weary veteran soldiers as convincingly as this' — The Press, December 2008