The Diary of 9 Platoon of 3 Company, 27 (Machine Gun) Battalion at Sidi Rezegh, while under the command of 6 New Zealand Infantry Brigade

Jump to a section:

Brian Cox was a member of 9 Platoon, C Company, 27 (Machine Gun) Battalion. The platoon was formed in October 1939 when the newly enlisted men, many of them from Nelson, entered Burnham Military Camp near Christchurch. After three months’ training in New Zealand, the battalion travelled overseas as part of the First Echelon of the 2nd New Zealand Expeditionary Force. During the three and a half years that they were overseas they saw action in Greece and North Africa campaigns.

From 23 November until 1 December 1941, while under the command of 6 New Zealand Infantry Brigade, 9 Platoon of C Company was in action on the escarpment at Sidi Rezegh in the Libyan Desert. From his extensive research for Desert War – The Battle of Sidi Rezegh, and as a result of two trips to Libya to retrace the platoon’s movements during the battle, Peter has compiled a day-by-day account of 9 Platoon’s Sidi Rezegh action, including photographs of the battlefield as it appears today.

This map shows the key features of the Sidi Rezegh escarpment, which is approximately 30 km south-east of Tobruk: Point 175, wadi Rugbet en-Nbeidat,  the airfield, the mosque, the track (known as the Trigh Capuzzo), and also the approaches to Sidi Rezegh from El Adem and Ed Duda. Another feature, the blockhouse, which is about 3 km west of Point 175, is not shown.

After crossing the border from Egypt into Libya on 18 November the three brigades of the 2nd New Zealand Division initially moved northwards towards the enemy positions near the border as part of 13 Corps. Four and 5 New Zealand Infantry Brigades moved to overcome or contain the enemy forces while 6 Brigade was held in reserve, either to support the other two brigades or to go and assist 30 Corps further west. When 30 Corps’ attack towards Tobruk broke down near Sidi Rezegh on 22 November, the brigade was ordered to move westwards and come to the aid of the Support Group of 7 Armoured Division, which was surrounded at Sidi Rezegh. 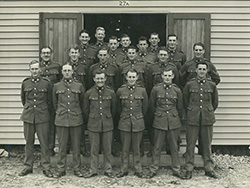 Part of the Platoon at Burnham 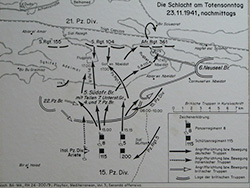 Early in the morning the platoon, travelling with the brigade, had advanced along the desert track (the Trigh Capuzzo) and had reached wadi esc-Sciomar, just to the east of Point 175. Twenty-five Battalion with supporting I-tanks was ordered to attack German forces at Point 175 but by mid-afternoon it was apparent that it was in difficulties and had suffered heavy casualties. Two companies of 24 Battalion and also 9 Platoon of 27 (Machine Gun) Battalion were ordered to assist 25 Battalion by advancing towards Point 175.

The platoon had ‘a tough time’. It approached from the east up the slope, but the trucks took the men too far forward and they were immediately under attack from small arms, machine guns, mortars and tanks. Because of the intense fire and their exposed position, the men were forced to the side of the escarpment and in the adjoining wadis (dried water-courses) to seek cover. By evening the platoon had suffered heavy casualties. 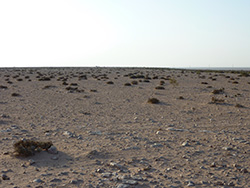 The approaches to Point 175. The blockhouse can be seen in the distance, on the skyline near the centre of the photo. It is situated on the ridge, beyond the Wadi Rugbet en-Nbeidat. 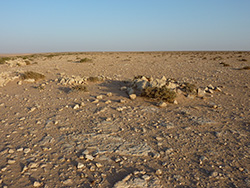 Close-up of some of the sangars by the side of the escarpment on the approaches to Point 175. This is looking back eastwards, the direction from which the platoon advanced. 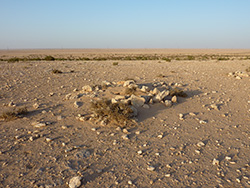 Sangar, looking towards edge of escarpment. 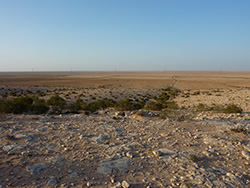 Looking down into one of the wadis in the direction of the Trigh Capuzzo, which is near the pylons, below the northern escarpment.

In his foreword to Point 175: The Battle of Sunday of the Dead by W.E. Murphy, which tells the story of that afternoon, Major General Howard Kippenberger describes the action as ‘one of the stiffest in which New Zealand troops have ever been engaged’. By the time evening fell Point 175 had still not been taken and 6 Brigade suffered total casualties of 420. Over 100 men from 25 Battalion were killed in the afternoon, more in a single action than any other New Zealand battalion in the Second World War. Murphy records that 9 Platoon ‘paid for its devotion in losses tragically heavy for such a small band’. Eleven men were dead or missing (six were killed) and several others wounded but safe.

Point 175 was finally taken and the area consolidated, with 9 Platoon supporting 26 Battalion covering the southern flank.

Three Company, as part of the brigade group, moved west for about 5 km and were heavily shelled. The wadi Rugbet en-Nbeidat and the blockhouse were taken after heavy fighting. 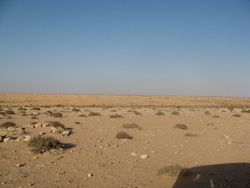 Looking eastwards down into the wadi Rugbet en-Nbeidat, the valley that curls left to right across the photo. The far side of the wadi rises towards Point 175. Note the sangar in the left foreground. 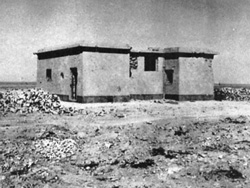 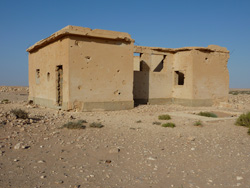 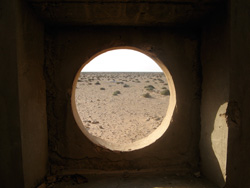 Looking from the blockhouse towards the south-west in the direction of the airfield. 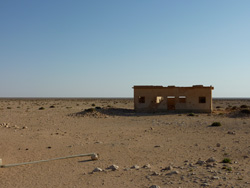 The front of the blockhouse. Note where it has been hit by a shell at the top of the wall on the right-hand side. This shell was one of several fired by artillery in New Zealand’s 4 Brigade, which had also been sent westwards slightly to the north, from a range of 3475 m. The southern escarpment can be seen on the horizon.

At 11 p.m. on the 25th, 3 Company moved west again, supporting the infantry battalions that were attacking the area around the mosque. The intention was to secure a box around this area and allow for a move through the box towards Ed Duda to link up with the garrison breaking out from Tobruk. The machine gun platoons were assigned to support the infantry battalions, but 7 and 9 Platoons were taken too far forward as part of the advance. The men attempted to dig in to consolidate their positions but the rocky ground made this very difficult. 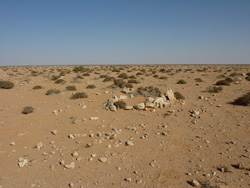 Sangars on top of the Sidi Rezegh escarpment, above the mosque, in the area where 9 Platoon dug in on the night of 25 November.

When dawn broke on the 26th, the 7 and 9 Platoon men found that they were in a very precarious position. They did not know that the infantry, who had been clearing the area, had pulled back leaving them on their own. They came under attack from all sides, including their own infantry and artillery and also other machine gun platoons, which did not know they were there. Inevitably there were further casualties and many from 3 Company were captured. Eventually both 7 and 9 Platoon gun teams buried their gun-locks and ran back to their own lines, leaving seven of their eight guns behind. The platoons returned to company headquarters, near the mosque. 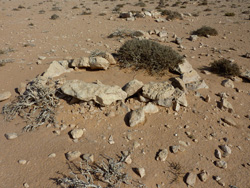 Close-up of some of the sangars. 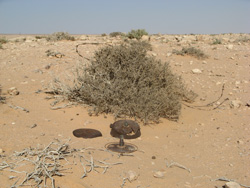 As well as sangars, the escarpment above the mosque still contains many landmines and a considerable amount of barbed wire. 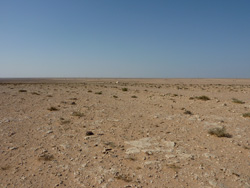 The mosque from the escarpment. Note the track going from beside the mosque towards the airfield, and also the remains of a landmine in the left foreground. 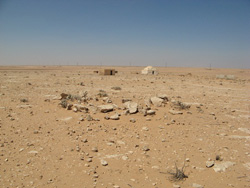 The mosque with a sangar in the foreground. Ed Duda is in the direction of the far left horizon and Belhamed of the centre left horizon. 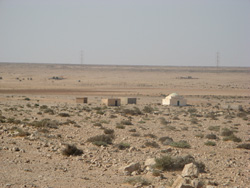 Close-up of mosque and looking over past the Trigh Capuzzo towards the northern escarpment. 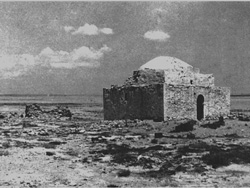 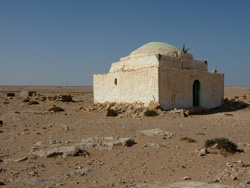 The area around the mosque was eventually taken on the night of 26–27 November. But 6 Brigade had been so badly knocked around that the task of linking with the Tobruk forces was given to the men of 4 Brigade. The link was finally achieved on the 27th at Ed Duda. For a few days there was a corridor open through to Tobruk, although the hold on the ridge was quite tenuous. The machine gun platoons were assigned to the infantry battalions and 9 Platoon was ordered back to join the engineers of 8 Field Company, to protect the southern flank. 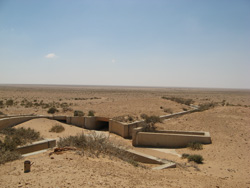 Italian strongpoint near Ed Duda beside the By-pass Road, close to the area where the 4 Brigade troops linked with the Tobruk garrison. 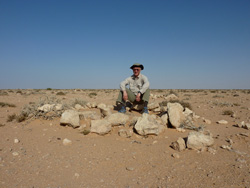 Peter Cox at a gun pit on the Sidi Rezegh airfield.

9 Platoon (and the other 3 Company platoons) remained with their infantry battalions, although some were subjected to counter attacks.

With 6 Brigade HQ under attack by tanks and infantry, the decision was made to take advantage of protection given by 4 Armoured Brigade and withdraw. In a ‘wild stampede of trucks across the desert’ 3 Company withdrew. It initially descended the Sidi Rezegh escarpment towards the 4 Brigade area across the Trigh Capuzzo, and ultimately travelled back across the border to Baggush. 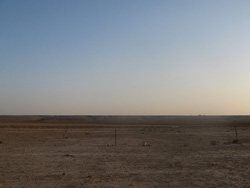 The blockhouse in the evening, on top of the escarpment, from the Trigh Capuzzo. 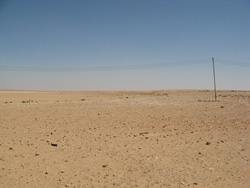 View looking eastwards along the escarpment from beside the mosque.

Looking back up towards the mosque from beside the Trigh Capuzzo. 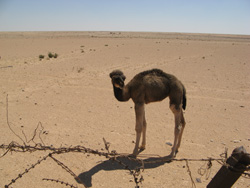 The Sidi Rezegh escarpment from the Trigh Capuzzo; the mosque is among the buildings above the head of the camel. 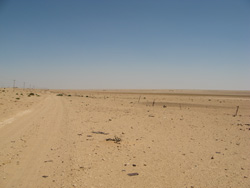 Along the Trigh Capuzzo from direction of El Adem and Ed Duda, with the Sidi Rezegh escarpment to the right.

After the withdrawal, a photo was taken of 3 Company. According to one platoon member the company had started 134 strong, and by the end of the campaign had been reduced to 38. All the 6 Brigade battalions had suffered heavy casualties and had been severely depleted.  At least 15 men from 3 Company were killed in the campaign, including eight from 9 Platoon.

After initially moving to Baggush, in January 1942, 3 Company returned to Maadi Camp in Cairo with 6 Brigade. The battalion was re-equipped and also brought up to strength with reinforcements. After a period of training, the platoon travelled with the New Zealand Division to Syria, where it was based for some months, before returning in haste to Egypt in June 1942. There it formed part of the Eighth Army until the end of the war in Africa in May 1943. In June that year most of the surviving members of the platoon returned to New Zealand on furlough. 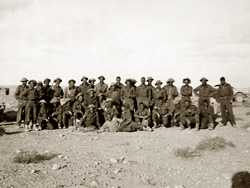 The photos of the blockhouse and the mosque in 1941 are from W.E. Murphy, The Relief of Tobruk, between pp. 150 and 151, courtesy Ministry for Culture and Heritage.

Geoffrey Cox, A Tale of Two Battles: A personal memoir of Crete and the Western Desert 1941,Kimber, London, 1987.