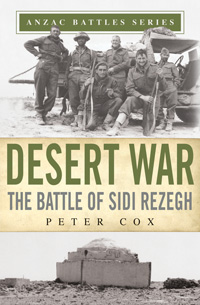 Sidi Rezegh, fought during Operation Crusader in Libya over November and December 1941, has been described as ‘the forgotten battle of the Desert War’. The Eighth Army’s objective in Crusader was to retake Cyrenaica, the eastern region of Libya, and ultimately drive the Italians and Germans out of North Africa. The campaign was partially successful, and did achieve the badly needed relief of Tobruk, where Australian and other Allied troops had been trapped.

The New Zealand Division played a major role in Crusader, a campaign that was important in ultimately achieving British victory in North Africa. Despite this, it is a battle that has largely been neglected by historians, failing to receive as much attention as Crete, El Alamein or Cassino. Yet more New Zealand soldiers were killed or taken prisoner during Crusader than in any other campaign fought by ‘the Div’ during the war.

Peter Cox, whose father fought at Sidi Rezegh with 27 (Machine Gun) Battalion, draws on his experience of twice visiting the battlefield to tell the story of this complex and costly campaign. He sets the scene for the fighting in Libya, describes the unforgiving and inhospitable desert landscape, follows the stages of the action itself and recounts the often moving and heroic stories of the soldiers who fought there. Many never returned home.

This is both a clearly told and very accessible account of a significant New Zealand contribution to the Second World War and a tribute to the thousands of servicemen who took part in the punishing battle of Sidi Rezegh.

Desert Rats Association 2017:
‘I recommend that anyone interested in this period of the war read this book as it will enhance their understanding of the campaign.’ To read full review click here.

Britain At War, June 2015
‘A clear account was certainly needed and this well written and balanced study meets that overdue requirement.’ To read the full review click here.

Australian Defence Magazine, October 2015
‘Peter Cox has written a compelling account of a battle long neglected by other historians.’ To read the full review click here.

Pallasch 54, Austria, November 2015
‘An important New Zealand contribution to the war in Africa.’ To read the full review (in German) click here.

Matthew Wright, New Zealand Books, Quarterly Review, Spring 2015
Peter Cox has ‘pitched his material at the general reader - the practical audience of any author - offering a clear, unpretentious and competent narrative with many new eyewitness accounts that he researched for the book. This is where his account shines ... Cox hits the mark with his breakdown of the battle. This is no mean feat … This is important and superb historical writing by any measure.’ To read the full review click here.

Chris Moore, NZ Listener, 13 June 2015:
‘Cox’s account is a lucid, well-researched study of the conflict … He succeeds in transforming a single place name into a vivid part of New Zealand history.’ To read the full review click here.

The Weekend Herald, 11 July 2015:
‘… Peter Cox has written a detailed account…fascinating for anyone with a family connection....’ To read the full review click here.

The Northland Age, 16 June 2015:
‘… Peter Cox has done a very good job of righting the wrong of allowing Sidi Rezegh to slip into obscurity. The descendants of those who fought there, particularly, should read this book, and wonder anew at the courage of their forebears....’ To read the full review click here.

Heritage New Zealand, Winter 2016:
‘Peter Cox … takes us inside the battle, giving a detailed story of events as they happened — not just from official records, but also from the participants’ perspectives using diaries, personal records, photos and correspondence as well as interviews with some of the veterans.’

Quentin Johnson with Kathryn Ryan on Radio New Zealand National Nine to Noon, 20 May 2015
Click here to listen to Audio

Desert War - The Battle of Sidi Rezegh is a book of the Anzac Battles Series (series editor Glyn Harper) published by Exisle Publishing. Available as a paperback or eBook from www.exislepublishing.co.nz and wherever good books are sold. 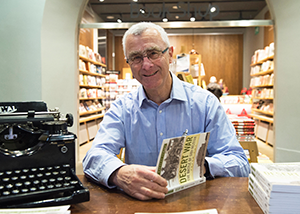